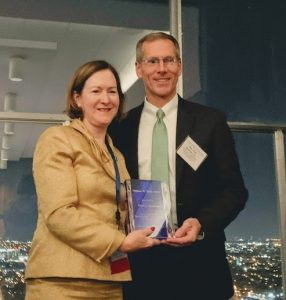 Paul Knierim, the head of our dispute resolution practice area, just returned from Philadelphia where he was awarded the National College of Probate Judges (NCPJ) highest honor – the Treat Award for Excellence. This national award recognizes Paul for his significant contribution to the improvement of the law in the probate field while he served 11 years as Connecticut’s Probate Court Administrator.

While serving as Probate Court Administrator, Paul’s accomplishments were both impressive and numerous. They included:

“The most critical accomplishment of Judge Knierim’s tenure as Probate Court Administrator was massive Probate Court reform in his first year in office where he successfully built consensus among legislators, judges and municipal leaders,” said Judge Dianne E. Yamin of Danbury, who is a member of the NCPJ Executive Board.

Like father, like son – Paul’s national recognition for his decades of dedication comes 30 years after his father, Judge Glenn E. Knierim, received this same prestigious award.

Join us in congratulating Paul for his outstanding contributions and this much deserved award.

To learn more about Paul, read on…