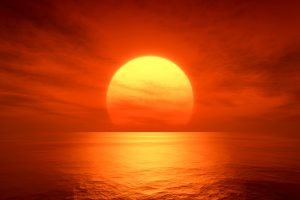 It was a mystery. Every evening around 5 o’clock, my mom would change. She’d become resistant, paranoid and sometimes belligerent. She would even hallucinate – claiming to have watched me from the window as I marched in a parade!

A few hours later, and certainly the next day, she would be back to her happy, easy-going self.

She was sundowning. A term I had never heard until an aide at the assisted living facility filled me in – and gave me some ideas for how to handle it.

Sundowners syndrome, also called sundown syndrome or sundowning, refers to a group of symptoms seen in mid- and late-stage dementia and Alzheimer’s disease. It’s relatively common, affecting up to 1 in 5 people with Alzheimer’s.

How do you recognize sundowners syndrome?

They may display certain behaviors, including yelling, pacing or wandering around the house, and like my mom – seeing or hearing things that aren’t there. People trying to help someone who is sundowning may find them obstinate and unwilling to take direction.

The common factor is that these emotional states and behaviors emerge in late afternoon or evening, hence the syndrome’s name. The disturbed or unfamiliar behavior can last several hours.

Sundowners syndrome can’t be cured, but it can be treated

Researchers and medical professionals are still learning a lot about sundowners syndrome. Episodes maybe brought on by decreasing light or by disruption to the body’s rhythms. Currently, there is no cure for sundowners syndrome, but it can be treated by keeping track of what triggers episodes and avoiding those triggers as much as possible.

If you’re taking care of someone with sundowners syndrome, you can try the following tips:

Sundowning is very real – it’s not your imagination!  So next time your loved one uncharacteristically exhibits some of the behaviors listed above, think of this odd but cute expression called sundowning. Try some of these tips and rest assured it will fade off as the evening passes.

Are You Ready to be Your Parent’s Caregiver?