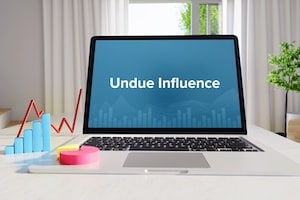 People sometimes manipulate others who are vulnerable in some way and particularly dependent on others—for example, someone who is quite elderly or ill. Defrauding them, or just plain stealing, is one form of elder abuse. Another is to exert what lawyers call “undue influence” on a vulnerable person, disrupting the person’s natural impulse to provide for family members and instead talking them into leaving assets to the manipulator.

Family members may not find out about a fishy estate plan until after the person has died; the influencer obviously has a strong motivation to keep last-minute changes under the radar. But it may not be too late. Relatives who suspect that the deceased person was taken advantage of—and didn’t just, voluntarily of their own free will, change his or her mind—can express their suspicions at the probate court. If they succeed in proving undue influence, the probate judge could rule that the Will, or other estate planning document, is invalid.

What is Undue Influence?

Someone who suspects undue influence must bring a Will contest in probate court, after the Will-maker’s death. This can be done whether or not there is a regular probate court proceeding to probate the Will and distribute the estate assets. It’s up to the complaining relative to prove that the Will was written under someone’s undue influence. To do that, generally the person must prove that:

People who are in a position to control a vulnerable person’s living situation or finances are the ones who have the opportunity to exert undue influence over estate planning. For example, undue influence may be exerted by a caretaker, or a relative. The Will-maker may be elderly and frail, and suffering from mild dementia, but that’s not always the case. Anyone who is physically or mentally ill can be susceptible to improper influence.

To avoid a court battle after your death over undue influence, take the same steps you would take to avoid other disputes: Make sure your estate plan isn’t a surprise to your family members, and if you’re leaving assets in a way that will confuse or disappoint relatives, explain it now.

If you’re worried about a vulnerable relative being taken advantage of, contact us now. Acting now to prevent abuse is vastly preferable to trying to fight it later with a lawsuit. If your family member clearly isn’t able to make rational decisions (including estate planning decisions) on his or her own, go to court to get a guardian or conservator appointed.

9 Ways Connecticut Protects Against Conservatorship Abuse
Estate Planning and Disgruntled Heirs: Ways to Avoid the Fight
Identifying and Preventing Financial Exploitation of the Elderly
Minimize the Changes of Your Will Being Challenged
Undue Influence: How It Happens and What You Can Do