Caring for 2 Parents with Different Needs…

Managing Assets to Care for Parents - One in a Nursing Home, One at Home 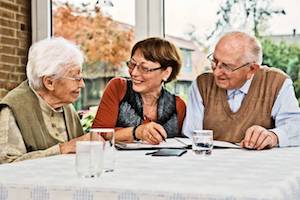 Lydia came to Czepiga Daly Pope & Perri looking for guidance on how to acquire Medicaid assistance for her mother, who needed to be in a nursing home, without exposing her father’s financial assets to the state.

She was rightfully concerned that if her parents either a) continued to pay for the nursing home privately, or b) tried to apply for Medicaid without protecting their shared assets, her father might not have enough money to live on.

Lydia had been living with her parents for five years and had been caring for them full time for two years when her mother’s health declined to the point that she needed to remain in a skilled nursing home.

For the first five months, the family paid for the mother’s nursing home privately, but it soon became clear that if they continued to do so they would deplete all the available assets. In that case, both spouses would be completely reliant on income, the bulk of which would go toward nursing home fees, leaving very little left to provide living expenses for the husband who was still at home.

Transferring Assets to a Caregiver Child

Lydia’s parents had shared assets that disqualified her mother from receiving Medicaid. One common option the family considered was transferring assets from Lydia’s mother to her father. However, that scenario would have made Lydia’s father ineligible for Medicaid, a risk they didn’t want to take in case he needed that support in the future.

The solution we helped to implement was to transfer assets (including the family home and cash) to Lydia as a “caregiver child.”

This option was possible because of an exemption in the Medicaid rules that allows for the transfer of assets to a child who has been living with and taking care of his or her parents for a period of at least two years prior to the parent applying for Medicaid.

Under this exemption, the amount that can be transferred is calculated based on the amount of time the caregiver has been in this role and the value of the caregiver’s services based on average nursing home costs.

In Lydia’s case, the state estimated the average cost of care in a nursing home at approximately $12,000 per month. Multiplying that amount by the number of months Lydia had been her parents’ caregiver resulted in a compensation figure that allowed the transfer of not only the family home, but also some other liquid assets into Lydia’s name.

While there was some additional documentation to provide to the department of social services (primarily to prove that Lydia was, in fact, the primary caregiver during the years in question and that without Lydia’s care, her mother would have needed to be moved into a skilled nursing facility several years earlier), overall the process was fairly straight forward.

Ultimately, our solution enabled Lydia’s mother to qualify for the Medicaid benefits that would cover her nursing home costs while simultaneously allowing Lydia’s father to stay comfortably in his home with enough financial security to live comfortably.

If you need help figuring out how to protect your parents’ money from the costs of long-term care, contact us today.